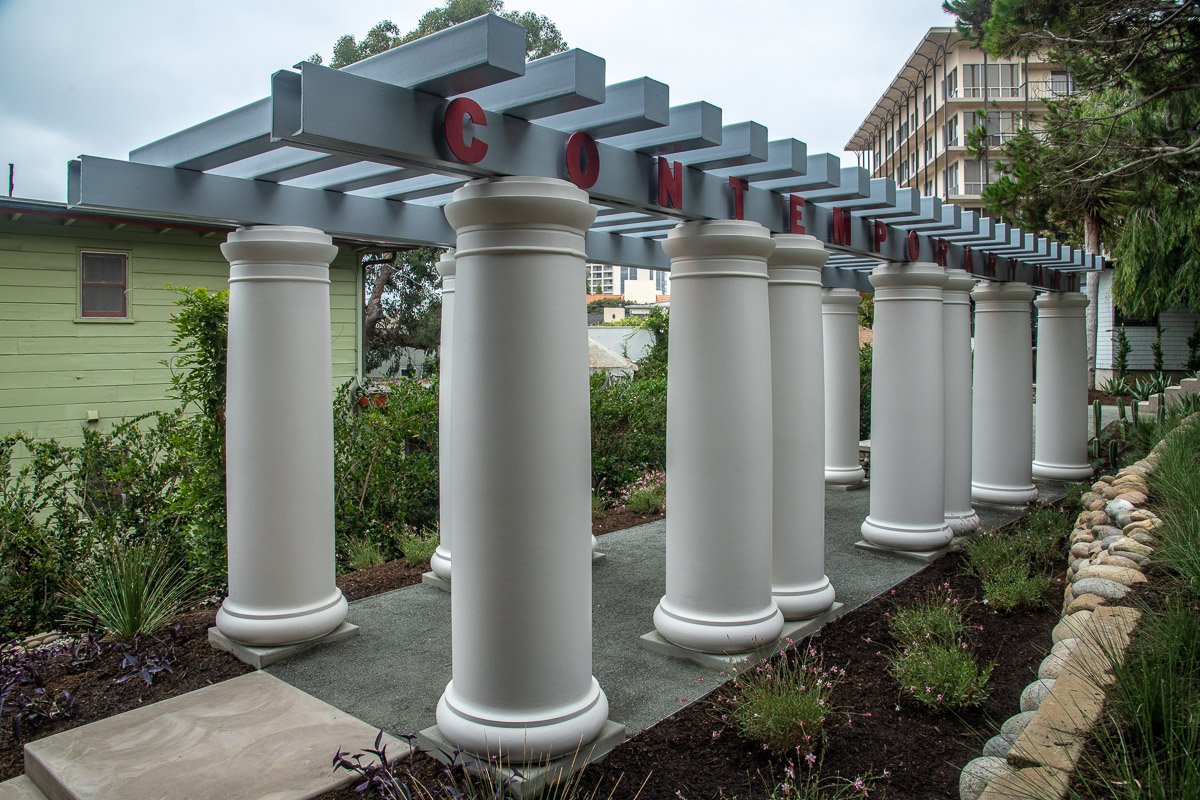 “…the architecture…works to harmonize...by means of analogy and contrast. Its symbolic and formal vocabulary is analogous to that of Gill’s buildings via the abstract-cubist forms...and rhythmic columned pergola."

The Venturi Pergola and Garden 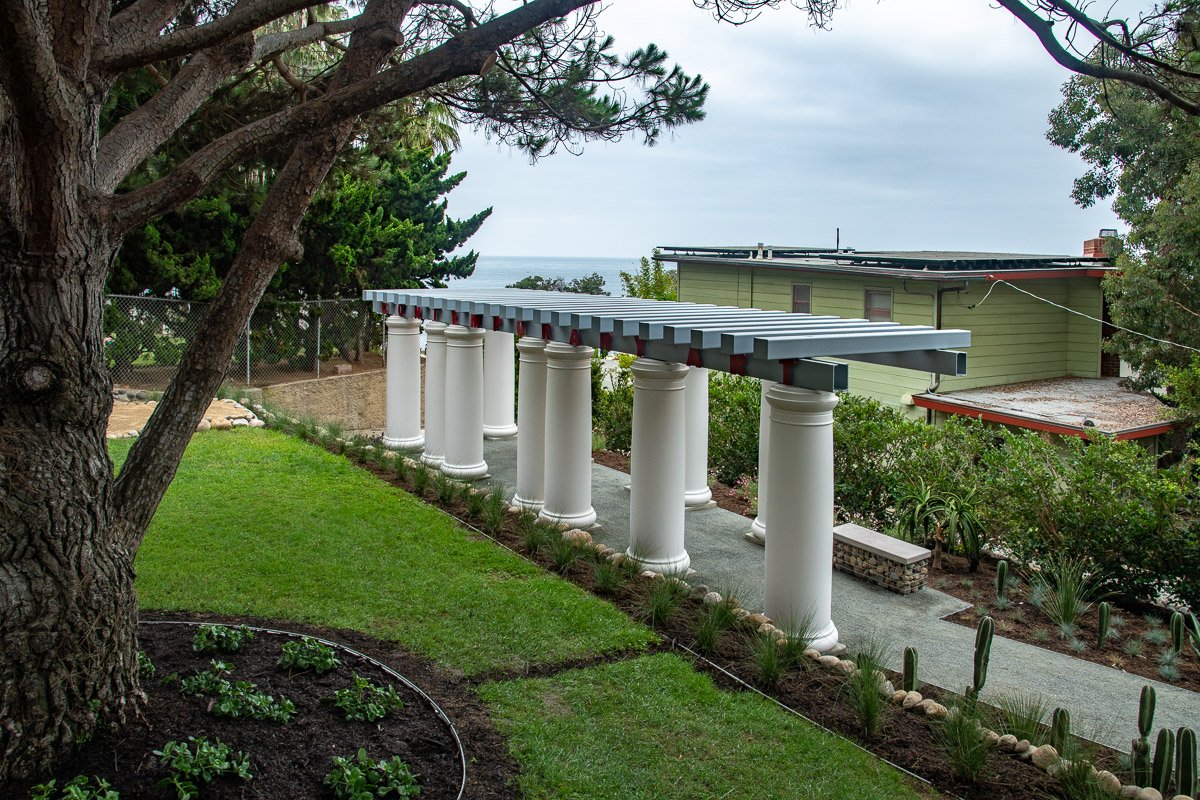 The Venturi Pergola and Garden is a public garden located at the La Jolla Historical Society on the lower terrace of the Wisteria Cottage property.  The centerpiece of the garden is one of the pergolas designed for the Museum of Contemporary Art San Diego (MCASD) by the firm of Venturi Scott Brown and Associates (VSBA), founded by Robert Venturi and his wife and partner Denise Scott Brown.  The award-winning architects were responsible for the 1996 renovations and additions to MCASD in the postmodern style. The Venturi Pergola, part of a colonnade courtyard anchoring the museum’s entrance, was removed during the current renovation and expansion of the museum by architect Annabelle Selldorf. The pergola is an architectural fragment of the VSBA design with ‘Contemporary Art’ signage on the horizontal beam above the columns; it originally flanked the north side of the Prospect Street entrance to MCASD.

The La Jolla Historical Society saved the ‘Contemporary Art’ pergola for several reasons: appreciation of the significance of VSBA’s postmodern design of the MCASD entry façade, the importance of Robert Venturi and Denise Scott Brown to the history of postmodern architecture, and the fact that this building was the only VSBA project executed in San Diego. Postmodern architecture represented a stylistic move away from the severity of the modernist steel-and-glass cube and included the re-discovery of historical ornamentation abstracted as contemporary form. The former MCASD façade was a good example. Venturi, looking across the street at Irving J. Gill’s 1914 La Jolla Woman’s Club, created a postmodern interpretation of Gill’s modern interpretation of Greek Doric columns configured as a pergola, complete with wisteria vines. Venturi wrote in Learning from La Jolla (MCASD 1996):

"On the outside, the architecture of this new building works to harmonize with that of the old buildings in front by means of analogy and contrast. Its symbolic and formal vocabulary is analogous to that of Gill’s buildings via the abstract-cubist forms, multiple arched openings, and rhythmic columned pergola, while the larger scale of these forms along with the iconographic dimension with the design contrasts with that of Gill’s buildings."

The Society recognizes the important historical relationship between VSBA and the work of early 20th-century architect Irving J. Gill. The celebrated modernist architect designed the original residential entry façade for philanthropist Ellen Browning Scripps in 1915, which VSBA reconstructed as part of the MCASD entry in 1996. With Scripps patronage, Gill also designed the La Jolla Woman’s Club in 1914 across the street from MCASD, and the pergolas there influenced the VSBA design concept for MCASD. Additionally, Gill remodeled the La Jolla Historical Society’s Wisteria Cottage, then owned by the Scripps, during the period 1907-09, adding a redwood pergola appropriate to the Arts & Crafts architecture.

Recognizing the opportunity to save and historically preserve the ‘Contemporary Art’ pergola as an architectural fragment, the Society relocated and restored it to the condition designed by VSBA, with the original materials and same paint colors, including the red ‘Contemporary Art’ lettering.  This provided an excellent historic preservation mitigation strategy, offsetting the loss of the VSBA pergola entryway at the museum.  The new location of the pergola in the Society’s lower terrace garden is 300 feet from the original placement, where it remains part of the Scripps-Gill Cultural District.

Development of the lower terrace of the Society’s property into a public garden provides a free-admission amenity for residents and visitors, and shares VSBA’s ‘Contemporary Art’ pergola with current and future generations. The Venturi Pergola and Garden opened to the public in September 2018.

The Venturi Pergola and Garden was made possible with the support of the County of San Diego, City of San Diego, Museum of Contemporary Art San Diego, Hugh Davies and Faye Hunter, La Jolla Concours d’Elegance, LJHS Board of Directors members Tony Crisafi AIA and Matthew Mangano PE, and landscape architect Greg Hebert. 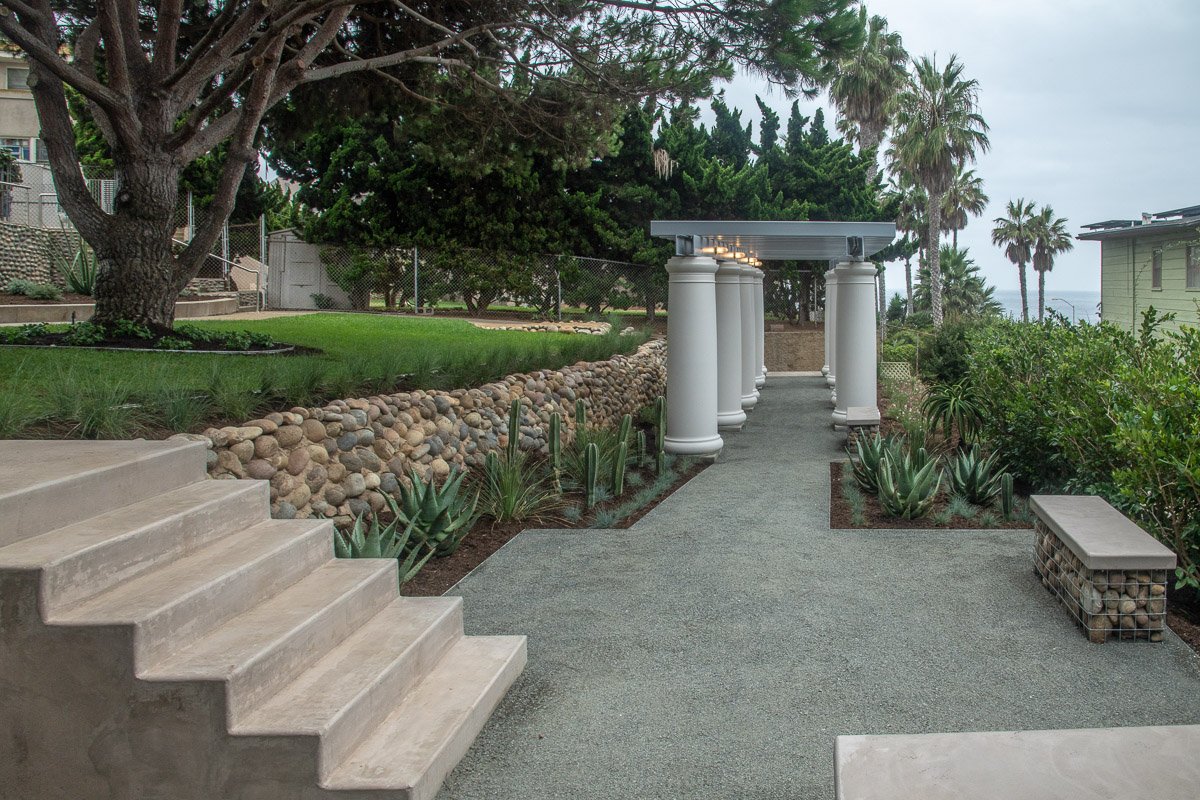