Master Architect Irving Gill (1870-1936) is considered a pioneer of the early modern movement in architecture, and there are numerous examples of his work still remaining in San Diego. A number of these important buildings are in La Jolla, including the La Jolla Woman’s Club, La Jolla Recreation Center, and at The Bishop’s School and Scripps Institution of Oceanography. The photographers for this project, Philipp Scholz Rittermann, Suda House, and John Durant, were commissioned by the Society to take Gill’s philosophical idea and produce a body of new works each of which includes all or part of a Gill building. They were asked to be creative in their interpretation, to diverge from standard building portraits, and to translate a historical idea into a modern perspective. The resulting exhibition presents an adventure into the legacy of Gill and this unique aspect of his philosophy, and the three artist’s present interpretations that are uniquely suited to the media of contemporary photography. 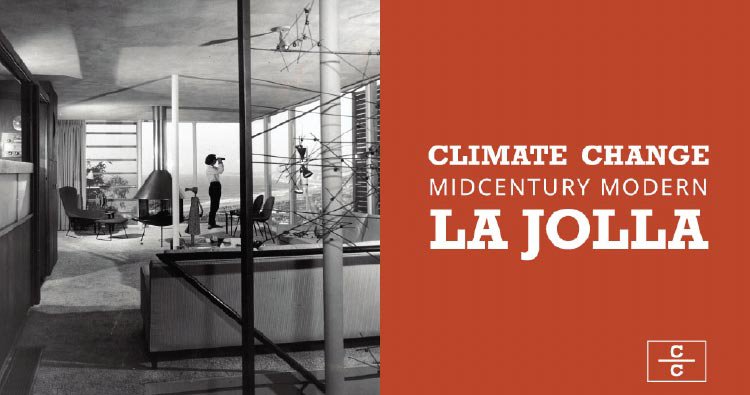 The 1950s and 1960s were decades of change for La Jolla, when a small circle of postwar modernists emerged to spearhead new ideas in the arts, design, and architecture. This group of multitalented residents, whose interests ranged from marine biology to abstract painting and from folk music to modern furniture, created a climate for modernism that was unique and enduring. Climate Change: Midcentury Modern La Jolla frames the remarkably rich creative culture that developed in 1950s and 1960s La Jolla with period photographs of modern architecture and objects that were exhibited in the community’s museums and galleries, offered locally in retail showrooms, and made or designed by local residents. Case studies of individuals who embody different aspects of La Jolla midcentury modernism, including Russell Forester, Robert Mosher, Lynn Fayman, Sam Hinton and Jacob Bronowski, examined the example they set for modern living and the dynamic and influential role they played in the community. Curated by Dave Hampton.

In the early days of La Jolla the possibilities were as wide open as the land. The streets and land lots laid out by Frank Botsford in 1887 invited people to make their lives by the sea, but offered few clues as to what kind of community might take shape there. As in many places, women took the lead in establishing the cultural life of the village. Anna Held, Ellen Mills, Florence Sawyer, and others worked to create spaces devoted to art, education, and spirituality—elements seen as integral to a civilized society in the late 19th and early 20th centuries.

When Ellen Browning Scripps built her first home in La Jolla in 1886 at the age of sixty, she thought she would spend her remaining years there in peace and quiet. Yet she and her sister Eliza Virginia, who had followed her to La Jolla, were soon investing in properties around town, and contributing their time and financial resources to endeavors they hoped would benefit the citizens of La Jolla.

The lasting contributions of the Scripps sisters are evidenced in the missions of La Jolla’s most important institutions, as well as in the architecturally significant buildings that house those institutions. Scripps On Prospect: Cultural Legacy explores both of these aspects of the Scripps legacy, focusing on organizations located on or along Prospect Street: St. James by-the-Sea Episcopal Church, The La Jolla Woman’s Club, The City Recreation Center, The Bishop’s School, Scripps Memorial Hospital and Metabolic Clinic, and the two residences owned by the Scripps and their descendants, Wisteria Cottage (now the La Jolla Historical Society) and South Moulton Villa (now the Museum of Contemporary Art San Diego). Scripps on Prospect: Cultural Legacy marks the second of two collaborative exhibitions organized by MCASD and La Jolla Historical Society.