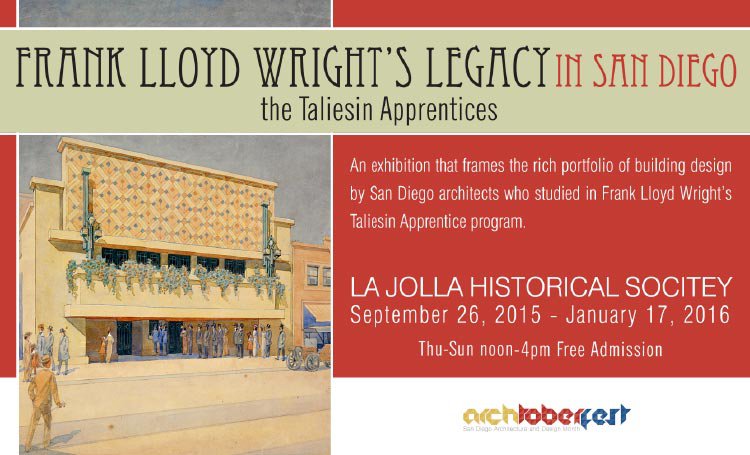 In the decades following World War II, those who studied under architect Frank Lloyd Wright in Spring Green, Wisconsin and Scottsdale, Arizona through his Taliesin apprentice program designed and built a fabulous array of structures in La Jolla and San Diego. Several of them, including Vincent Bonini, Frederick Liebhardt, Loch Crane, Sim Bruce Richards and Bill Slatton, established their professional practices in San Diego. In addition to these focal studies, the work of Frank Lloyd Wright and his two sons Lloyd and John was presented. Frank Lloyd Wright’s Legacy in San Diego: the Taliesin Apprentices framed this remarkably rich portfolio of work with architectural drawings, photographs, and ephemera to demonstrate the power of Wright’s influence. The exhibition displayed, for the first time in San Diego, Frank Lloyd Wright’s unbuilt designs for the region. Curated by Keith York.

This exhibition drew on the extensive archives of the La Jolla Historical Society to present vignettes of collection material that provide windows into various aspects of the community’s past. Included is the story of a doll made by Parisian doll maker Jules Nicholas Steiner in the late nineteenth century and owned by early La Jolla resident Anna Held. Recently rebuilt and conserved, and with a new wardrobe by fashion designer Zandra Rhodes, Miss Olive Mishap’s century of misadventure spans the history of La Jolla. The history of Wisteria Cottage, now housing the Society’s exhibition galleries, has seen uses as varied as rental cottage, church office, elementary school, and bookstore, and is presented from its early remodel by architect Irving Gill to its recent 2014 award-winning historic rehabilitation. The exhibition showcased the La Jolla Recreation Center, celebrating its 100th anniversary in 2015, and provided context for both Wisteria Cottage and the Recreation Center with objects related to the Scripps-Gill cultural zone. The midcentury modern era is represented by Julius Shulman photographs of Oxley House, the only building in La Jolla by famed architect Richard Neutra, and by the fashion photography of Charles Schneider.

Funding for this exhibition provided by Raul and Lisa Albanez, Elizabeth Barkett – Ross Thiele & Son LTD, Ruth Covell, Ray and Ellen Merewether, and Nell Waltz. Institutional support provided by the City of San Diego Commission for Arts and Culture and the Members of the La Jolla Historical Society.

What was and is no longer is once again from the imagination of artists, architects, and writers. This exhibition was an interdisciplinary, collaborative project that highlights the historic as seen through the eyes of contemporary creative practitioners. Historians from the La Jolla Historical Society and the Save Our Heritage Organisation (SOHO) identified important San Diego buildings that have been lost or destroyed. The participating visual artists, architects, and writers selected a lost building as a point of departure, imagined the building in an alternative reality, and created a new work of art to express this imagining. The juxtaposition of contemporary art and historic preservation enlighten each other and provide a reflection of the postmodern built environment, the cultural and sustainability value of old buildings, and prospective new ideas in architecture and design. Organized by Lynda Forsche, Roy McMakin, and David Jurist.

Major funding for this exhibition provided by Ray and Ellen Merewether, the Florence Riford Fund of the San Diego Foundation, and IS Architecture. Additional support came from Artworks San Diego, Melesse and Robert Traylor, Seonaid McArthur and Barry Bielinski, Margie Warner and John H. Warner Jr., and an anonymous gift. Institutional support provided by the City of San Diego Commission for Arts and Culture and the Members of the La Jolla Historical Society.