LJHS exhibitions are sponsored in part by ArtWorks San Diego 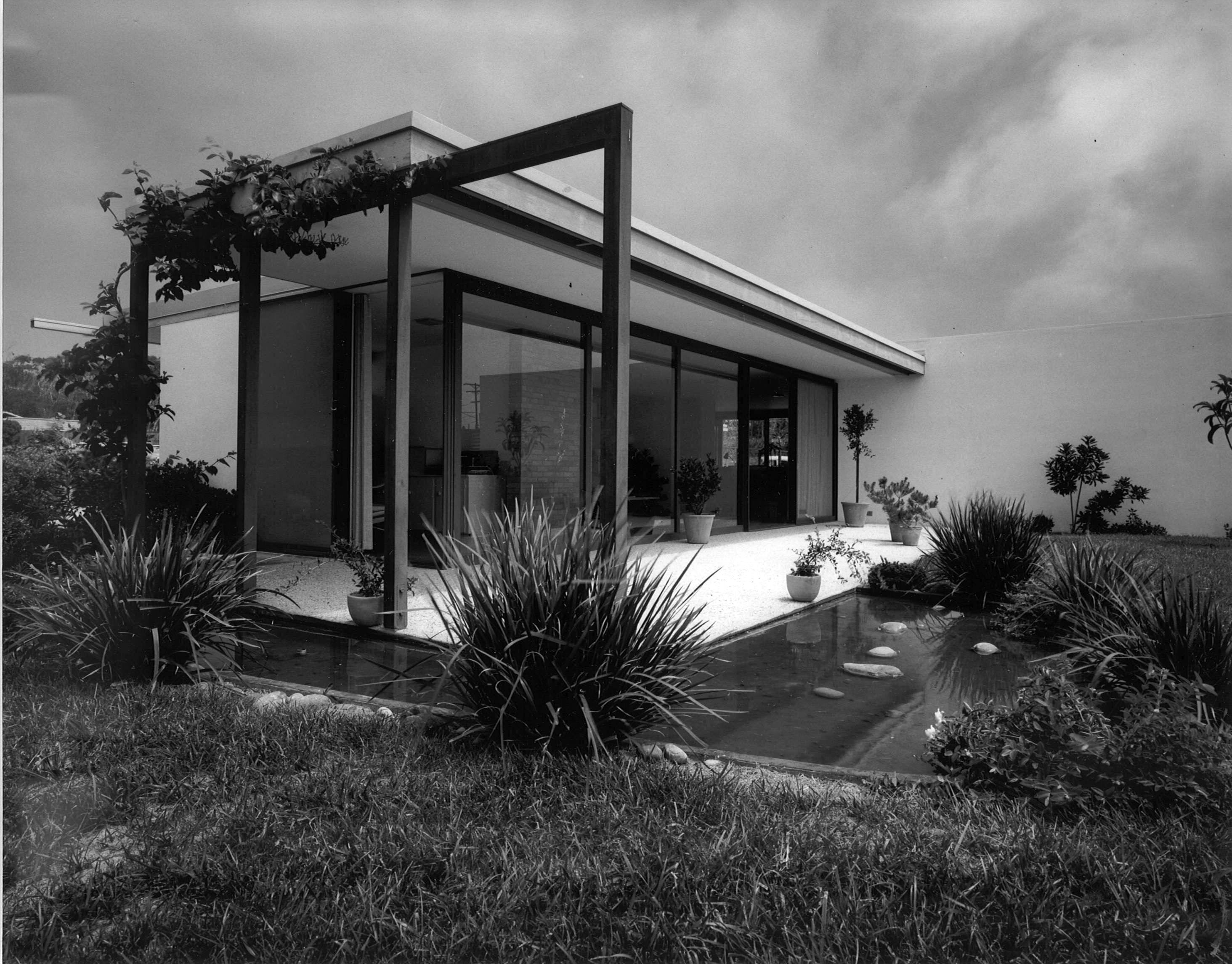 Recognized for his work in Los Angeles and Palm Springs, it is not widely known that between 1934 and 2007, world-renowned architectural photographer Julius Shulman (1910 – 2009) shot over 200 projects in San Diego.  His clients were architects, designers, newspapers, book and magazine publishers, and construction companies as well as developers, and included notable San Diego architects Lloyd Ruocco, Sim Bruce Richards, Henry Hester, and Frederick Liebhardt. Shulman’s work, spanning several decades, documented the region’s evolving 20th century architectural landscape, and he played an instrumental role in sharing California’s unique post-War, mid-century modernism with an international audience. Through a large number of films, publications, and exhibitions, focused largely on his work in Palm Springs and Los Angeles for architects Frank Lloyd Wright, Pierre Koenig, Charles Eames, and Richard Neutra, interest in Shulman’s work continues to this day. Because his images of San Diego have not been widely shared or published, this unprecedented exhibition, showcasing both vintage and contemporary prints of his photography, will introduce audiences to Julius Shulman’s projects in La Jolla alongside ephemera that contextualize this historically significant work. Curated by Keith York.

The St. James GALLERY by-the-Sea, located at St. James by-the-Sea Episcopal Church, 743 Prospect Street, La Jolla, will present an exhibition of photographs of San Diego's Mid-Century Modern Places of Worship from September 27 to October 27, 2019. The exhibition features the work of well-known photographers Darren Bradley and George Lyons and a section of photographs by members of San Diego photography program Outside the Lens. In addition, there will be a selection from entries in a juried photography contest sponsored by St. James by-the-Sea. There will be an Opening Day showing with light refreshments on Friday, September 27th from 5:30 to 7:30 pm, in conjunction with the opening of the Shulman Exhibition at La Jolla Historical Society.

History in Motion: Devices and Wizardry in Early Cinema 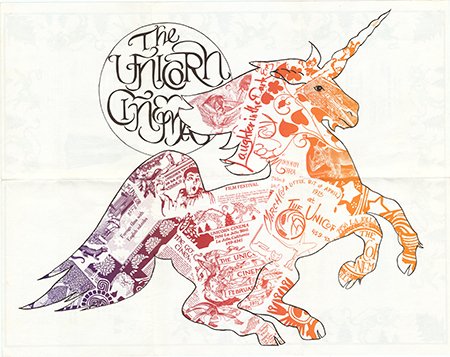 A La Jolla resident of the early twentieth century had many cinematic opportunities, whether enjoying a nightly toy magic lantern slide show at home, walking to a silent film premiere blocks away, or taking the trolley to a downtown San Diego movie palace.  Photographs were a staple of depicting people, places and events of interest, but motion pictures, special-effects-laden slide shows, and 3-D imagery engaged beyond a static photo. This exhibition explores these silent films, magic lanterns, and stereoscopic novelties. Using an early 1900s vintage multi-media approach, the project features a study of the silent melodrama films of La Jolla Cinema League (a well-equipped 1920’s film club in La Jolla who were trained members of the Amateur Cinema League), magic lantern-style slide presentations of La Jolla Historical Society archival holdings, stereoscopically-enhanced views of the past (using vintage tools and current technology), a survey of the old movie palaces of La Jolla, silent film secrets of San Diego County, surprising multi-media tools of the past with a look to the virtual reality future, and revelations from vintage La Jolla home movies (from underwater films to underground Warhol sightings).  Curated by Scott Paulson.

Funding for this project generously provided by Margie and John H. Warner Jr. and by Elizabeth Barkett. Institutional support provided by the UC San Diego Library, City of San Diego’s Commission for Arts and Culture, and Members of the La Jolla Historical Society. 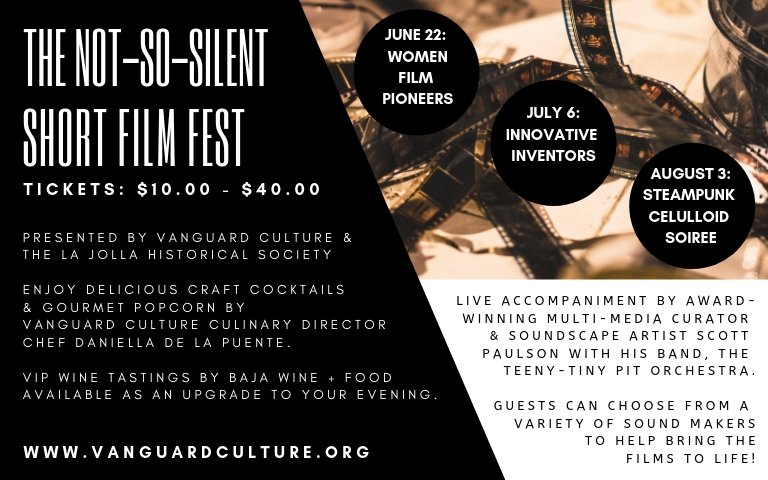 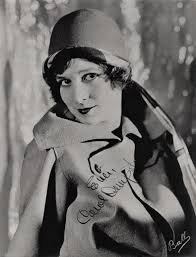 Movies by Moonlight: A Short Film Festival at the La Jolla Historical Society

Join curator Scott Paulson at the Wisteria Cottage Gallery for a Sunday afternoon, June 30, July 28, or August 25 at 1:00pm, with special guest Scott McAvoy of UC San Diego Library’s Digital Media Lab for an informal virtual reality presentation. Utilizing historic photographs by tourists and images from the La Jolla Historical Society archive, McAvoy has virtually reconstructed Windemere Cottage, an 1890s home by architect Irving J. Gill that was torn down in 2012.  You can walk around and through Windemere Cottage using virtual reality goggles!

The La Jolla Historical Society is extremely grateful to our collaborative partners for the History in Motion project.  Much gratitude to Vanguard Culture and the Library at UC San Diego!

Women played a seminal role in shaping La Jolla in the early 20th century. Their legacy lives on through the historic structures they built, the momentum they created for civic and artistic life, and the memories shared by the community. The life and history of ten women pioneers—including businesswomen, educators, and architects—will be examined and artistically interpreted by ten female contemporary artists. Each artist is paired with one historic figure to research and bring back to life by creating a painting, photograph, sculpture, or interactive installation that honors the essence and meaning of that pioneer woman’s life. Artists are invited to consider the personality and interests of each woman, the role each female trailblazer had in society, and how they helped cultivate a stronger community. The pioneer women are Louise Balmer, Mabel Bell, Florence Sawyer Bransby, Anna Held, Florence Palmer, Lilian Rice, Mary Richmond, Mary Ritter, Ellen Browning Scripps, and Virginia Scripps. Participating artists include Tara Centybear, Taylor Chapin, Becky Guttin, Bhavna Mehta, Lee Puffer, Bridget Rountree, Anna Stump, Cheryl Tall, Kelly Telebrico-Schnorr, and Rebecca Webb.

Funding for this exhibition generously provided by Sandy and Dave Erickson, Barbara Freeman, Meg Davis and Brian Earley, the Florence Riford Fund of the San Diego Foundation, and ArtWorks San Diego. Institutional support provided by the City of San Diego’s Commission for Arts & Culture and by the Members of the La Jolla Historical Society. 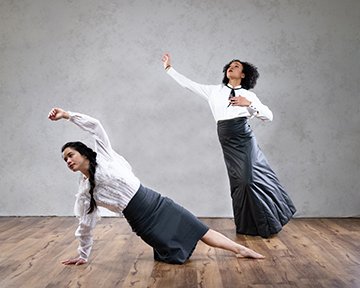 In conjunction with the exhibition Tangible Memories: Recollections of  La Jolla Pioneer Women, LITVAKdance presents three performance pieces on the property around the Wisteria Cottage entitled Re-imagining Suffrage. Artistic Director Sadie Weinberg choreographed the two main works, and a third transitional solo was made by dancemaker Betzi Roe based on the early owner of the cottage, Virginia Scripps. In this solo, Virginia acts as the host of the evening, ushering the audience from the front of the cottage where the first duet (loosely based on a scene from the 1897 play La Ronde) takes place, to the back of the cottage where a quartet completes the performance. Costumes are inspired by styles from the period 1895 through 1915.  LITVAKdance is comprised of seven women, and the dances touch upon women's themes that transgress time and place, and consider women's place in society, including questions about class, race, sexual orientation, gender equality and diversity.