Tijuana 1964: The Photography of Harry Crosby 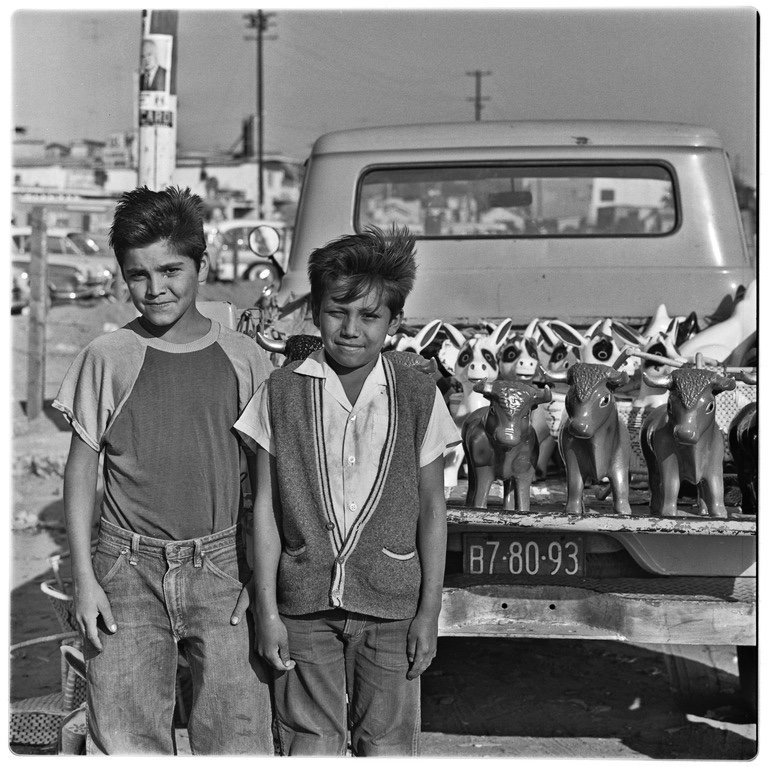 Harry Crosby moved to La Jolla as a boy in 1935.  In the 1950s, he had 12-year career as a science teacher at La Jolla High School, then pursued a second career in photography and history.  One of his early assignments was to photograph Tijuana, where he discovered and recorded the vibrant life of the city and neighborhoods beyond common tourist areas.  The rich photographic images he created of Tijuana’s urban and human landscapes chronicles community life and daily events. Tijuana 1964: the Photography of Harry Crosby presents an exhibition of original photographs from the period, crossing the international border to explore the shops, arcades, street vendors, fashions, vehicles, curios, churches, cemeteries, and diverse urban neighborhoods of the bustling Mexican city more than a half-century ago.  Curated by Melanie Showalter.

Funding for this exhibition generously provided by Sandy and Dave Erickson, Margie and John H. Warner Jr., the Florence Riford Fund of the San Diego Foundation, and ArtWorks San Diego.

The Society is immensely grateful for loans from the photographic collection and for the support of the Instituto Municipal de Arte y Cultura (IMAC), the Museo de Historia de Tijuana (MUHTi), and the Archivo Histórico de Tijuana (AHT); for additional materials from the Crosby Baja Collection at the University of California, San Diego; and for the support of the Institute for Regional Studies of the Californias at San Diego State University.

The Unfinished Story of Viejas Originals 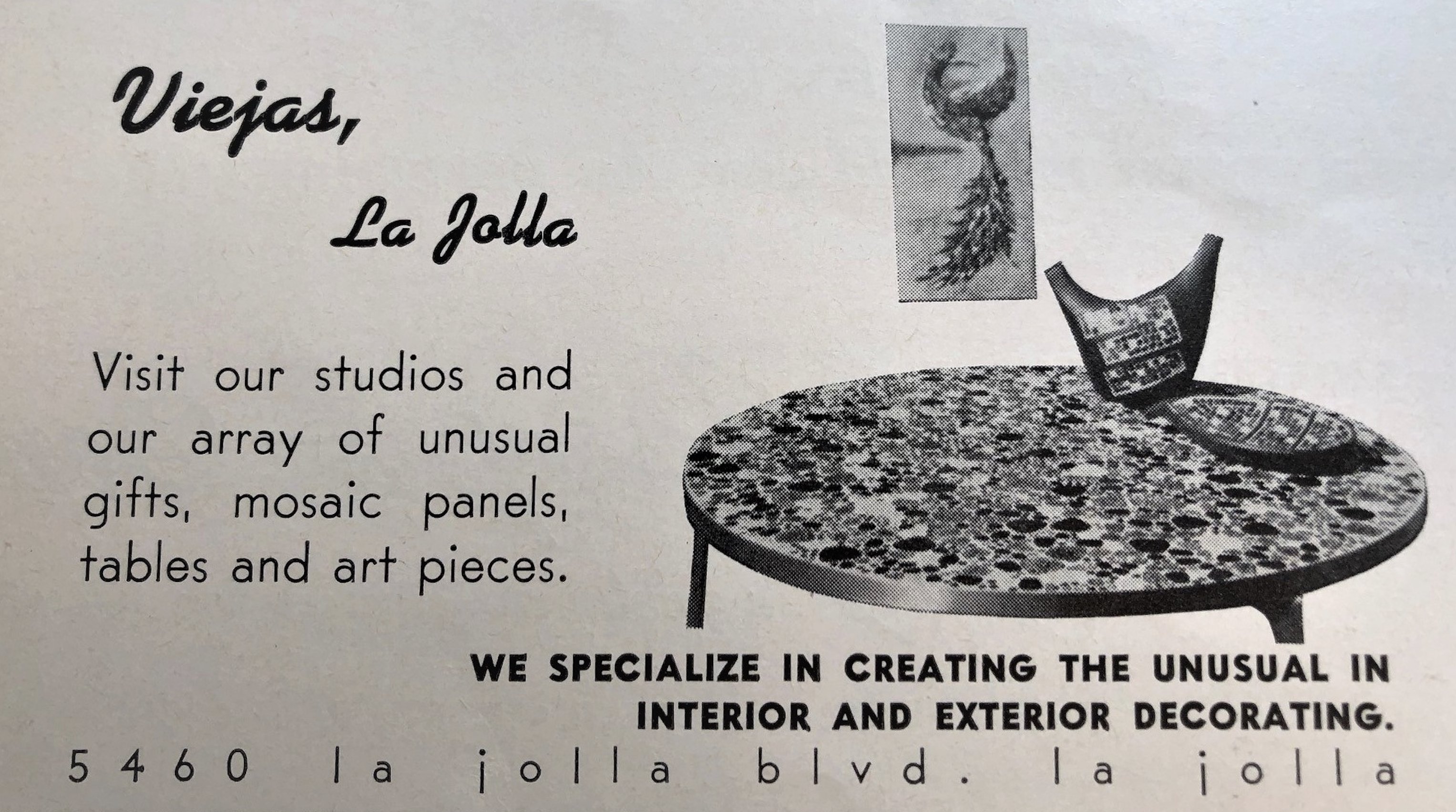 I’ve been learning about San Diego’s postwar, midcentury era for two decades now, interviewing artists, architects and craftspeople to document the region’s burgeoning creative scene during this time period. Between my own research, that of my contemporaries and colleagues, as well as the resources available at the La Jolla Historical Society, I’ve been able to close the loop on scores of stories that have captured my attention. However, there remain a few mysteries – places and people I’ve learned a bit about, but for which I’m still lacking a full timeline, accurate context and the colorful details that make them come alive.

One of the unfinished stories on my list is about retail outlets in La Jolla in the 1950s and 60s. Specifically, the stores and galleries where San Diegans could peruse and purchase contemporary furniture, craft objects and fine art. These were the tastemaker venues of the era, responsible for getting the work of emerging artists and designers into people’s homes and daily lives. I’m aware of two of the key local players in retailing modernism: Armin Richter Interiors and Dean Marshall Interiors. But there were also a handful of shorter-lived galleries and shops like Viejas La Jolla.

In early copies of Magazine San Diego, San Diego & Point and San Diego Magazine, one can gather a sense of what was important and newsworthy, fashionable and contemporary with each issue – both in editorial content and advertisements. Between 1959 and 1961, San Diego & Point hosted a curious set of ads for Viejas La Jolla that caught my attention. While little is known about the personalities behind this venture, its advertising featured slogans like "we specialize in creating the unusual in interior and exterior decorating.” Through these print ads, Viejas La Jolla stands out as a unique entry in our region’s post-War design and craft history. The streak of promotion between 1959-1960 indicates that Viejas sold mosaic panels and lighting fixtures as well as tables, copper enamels, "unusual gifts", "art pieces", and "objets d'art" all for "commercial and residential decoration."

Prior to moving from Alpine to Pacific Beach, William L. ‘Lester’ Ramsay (d. 1970) lost his home – the Alpine Tavern – in 1955. The Tavern reportedly hosted a museum, jewelry factory, the Alpine Artists & Writers Club and craft fairs as well as the Alpine Chamber of Commerce. By 1958, Chamber president William Lethbridge and Mr. Ramsay were both living in Alpine and working at Bali Hai Tropic Shop (established circa 1958).

By 1959, Lethbridge was living in La Jolla and speaking to the La Jolla Newcomers Club and La Jolla Women's Club on the topics of the art and history of mosaics. Ramsay had moved to Pacific Beach, around the same time, and established the Garnet Street Nursery prior to founding Viejas, Inc. “a mosaic-ceramic manufacturing firm.” That same year, Viejas -comprised of Ramsay, Lethbridge, and sculptor Jack Boyd - were commissioned to install a copper cross at the New Methodist Church.

Jack Boyd's mid-1950s migration, “…from Alpine's rustic slopes to the swank showrooms and exhibition galleries of coastal La Jolla, seems entwined with the origins of the Viejas shop, as its owners also traveled from San Diego's back country to the beach. The business’ name reinforces a sense of place, as it refers to the Viejas Band of Kumeyaay Indians, who are based just east of Alpine, where Boyd grew up,” offers curator, collector and writer Dave Hampton.

“We know only that Boyd contributed to the Viejas operation and had a space with his workbench in the back of the shop. Given his fluency in a wide range of techniques and materials, Boyd would have been a valuable asset to the design department at Viejas, but most of the products we've seen bearing the Viejas label lack the distinctive Jack Boyd look. An exception might be the mosaic tabletop—displayed in a September, 1959 ad in San Diego & Point (below)—with its composition of shapes abstracted from nature. It demonstrates an attractive blend of commercial appeal and design sophistication that is consistent in Boyd's work,” offers Hampton.

Dave continued, “At the time of his participation in the Viejas business, before he'd established his workshop/gallery off Morena Boulevard, Boyd cultivated an association with La Jolla, where his target clientele lived and shopped. He lived on Chalcedony Street in Pacific Beach but maintained a La Jolla post office box and employed variations of the catchphrase "Arts of La Jolla" in his print marketing.

Viejas continued to advertise in local publications, fostering an interest in mosaics and running the store through much of the ‘60s – including a commissioned mosaic in La Jolla’s Hotel Charro Penthouse. Viejas seems to have ended its run on March 27, 1968 when Fischer Auction Co. liquidated the inventory, “ordered sold by creditors”, including all equipment and fixtures held by Viejas Arts. Among the many items listed in the auction were jeweled and ceramic wall plaques, hanging & table lamps, occasional tables, ash trays, cigarette boxes, candle holders, serving trays as well as the materials of manufacture – Venetian glass and mosaic tiles, crushed glass, lamp bases, table legs and gold leafing. 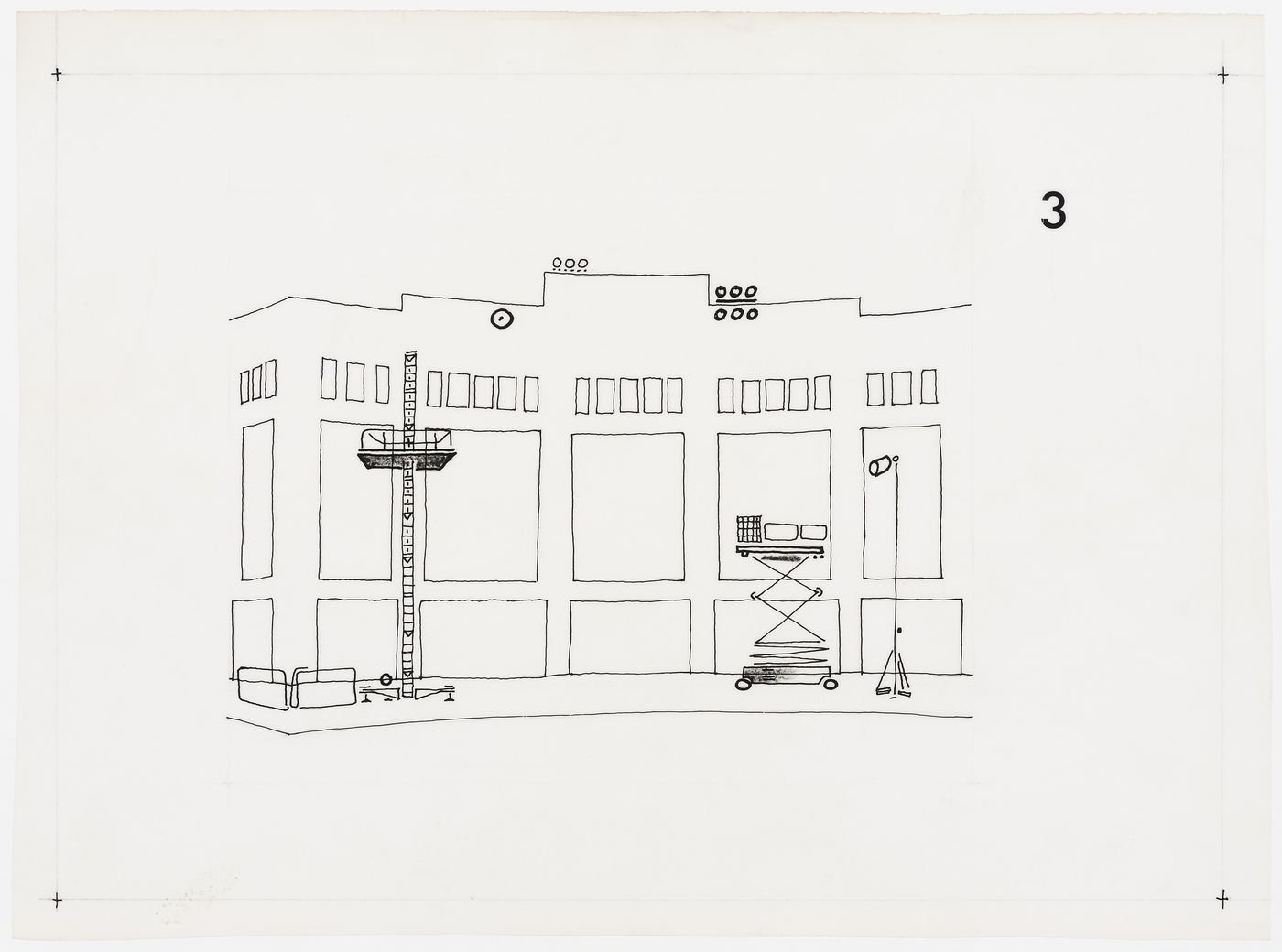 Ten architects, each in turn, are asked to create a sketch.  The subject matter is broadly defined; it could be the individual architect’s favorite historic building, or a favorite building of their own design, or an unrealized project they have a concept for but is unbuilt, or a detail of a project.  The requirements of the sketch are dimensional: a format of two (2) inches by three (3) inches with a horizontal orientation. Each sketch was placed in a small frame, and traveled in the coat pocket of LJHS Executive Director Heath Fox. It was shown at small group meetings in locations occasioned by the Director's work schedule. Each architect's sketch traveled in this way and was shown for a period of two months, after which it  transitioned online to this webpage. After the twenty month traveling period needed to accommodate the ten sketches, the original sketches became part of the LJHS archival collection, and the digital exhibition resides here, creating a record of architectural gestures at the end of the 21st century’s second decade.  Curated by Heath Fox.